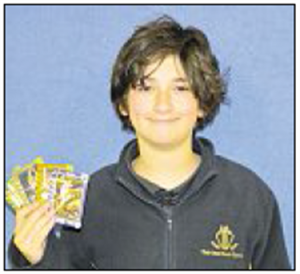 King launched his own charity last year where he collected excess football cards for disadvantaged communities. After witnessing the wastage of duplicate cards among his friendship group, the 11-year-old student from The King David School started Fortunate Footy Cards, which saw him collect more than 3000 unwanted cards last year. He liaised with Ardoch Youth Foundation to ensure that these cards were given to fellow footy fanatics across Victoria.

When speaking about the inspiration behind Fortunate Footy Cards, King said, “I started this idea because last year I saw how many doubles my brother and I had and I said to mum and dad, ‘Why don’t we give these doubles to people who don’t have the opportunity to buy them?’”

After the success of the inaugural collection last year, King is hoping to collect more than 10,000 cards this year and he is now reaching out to friends and family in Sydney and Perth to join the cause. “I want to collect cards at more schools in Melbourne this year. Also I’m going to get my cousins in Perth and Sydney to help. We are going to make collection boxes and send emails and use a Facebook page.”

While King is still young, he told The AJN he has “always cared about those less fortunate” than him, even raising more than $2000 for the Smith Family Foundation when he partook in the Around the Bay last year as one of its youngest participants. His father Jeremy King expressed his pride for his son’s achievements and suggested philanthropy is a core value of the family.

“We are immensely proud. We’ve always tried to teach the kids to think about people less fortunate than themselves and each of them have come up with their own ideas around philanthropy.” For more information and to get involved, email fortunatefootycards@gmail.com or like the Facebook page at www.facebook.com/fortunatefootycards

This article appeared in the AJN last week and is a worthy mention in this months missive. We are hugely proud of Aiden and his achievements which includes recently completing his Grey Wolf and being awarded his community badge for Fortunate Footy Cards.

« Roy Kaplan – Adult Recognition Awards 2015 » So where are our World Jamboree Scouts?